Increase awareness by sharing the platform's purpose and vision to local and international organizations.
timeline

The project lasted about 4 months.

Collaborating partners under NDA's in Ireland, United Kingdom and Canada

Facilitate awareness in order to start donations to fully fund and build the app.

Reading the scriptures has significantly decreased among youth and young adults.

Assembly gathering attendance and reading among Christians have fallen globally because of many contributing factors which includes embracing digitalization and social media through the use of Bible apps, Facebook groups, Twitter and Instagram accounts, streaming, satellite and radio channels. Unfortunately, these solutions have not solved the key challenge of consistent reading and connecting with others to learn invaluable skills and grow as individuals.

The aim is to build awareness of the app vision internationally among organizations within 6-8 months to enable building the app through donations.

Anav media is a subsidiary of Anav Services Inc. Who offers augmented and virtual reality business services to companies in various markets such as:

I started the project as an Experience designer and front-end developer.

The team consists of a seven (7) person core team which includes the CEO, three (3) advisors, Collaborating partners under NDA’s in Ireland, United Kingdom and Canada. So, most of the team was distributed but to create the deliverables necessary for this phase, three members were local but in different cities. The project lasted about 4 months.

I started the project with as an Experience designer and front-end developer. And, as the direction of the project became more concrete and I became more aware that the project needed full visual design support, I made my capabilities known so I could help and then, I transitioned to a product designer.

A journey map was designed to understand current and future actions. It helped us visualize how everything happened, and so we were able to see on paper if what was being done worked well or not.

Prototyping was done but scrapped because using technology had a bit of a learning curve. Instead we did wireframes, an ideation board and visual design. Logos were previously created but needed finessing. I was able to expand the visual identity to include assets for web and print. For all this to work stakeholder meetings were done through zoom.

I started building the website once we had high fidelity visuals and assets. 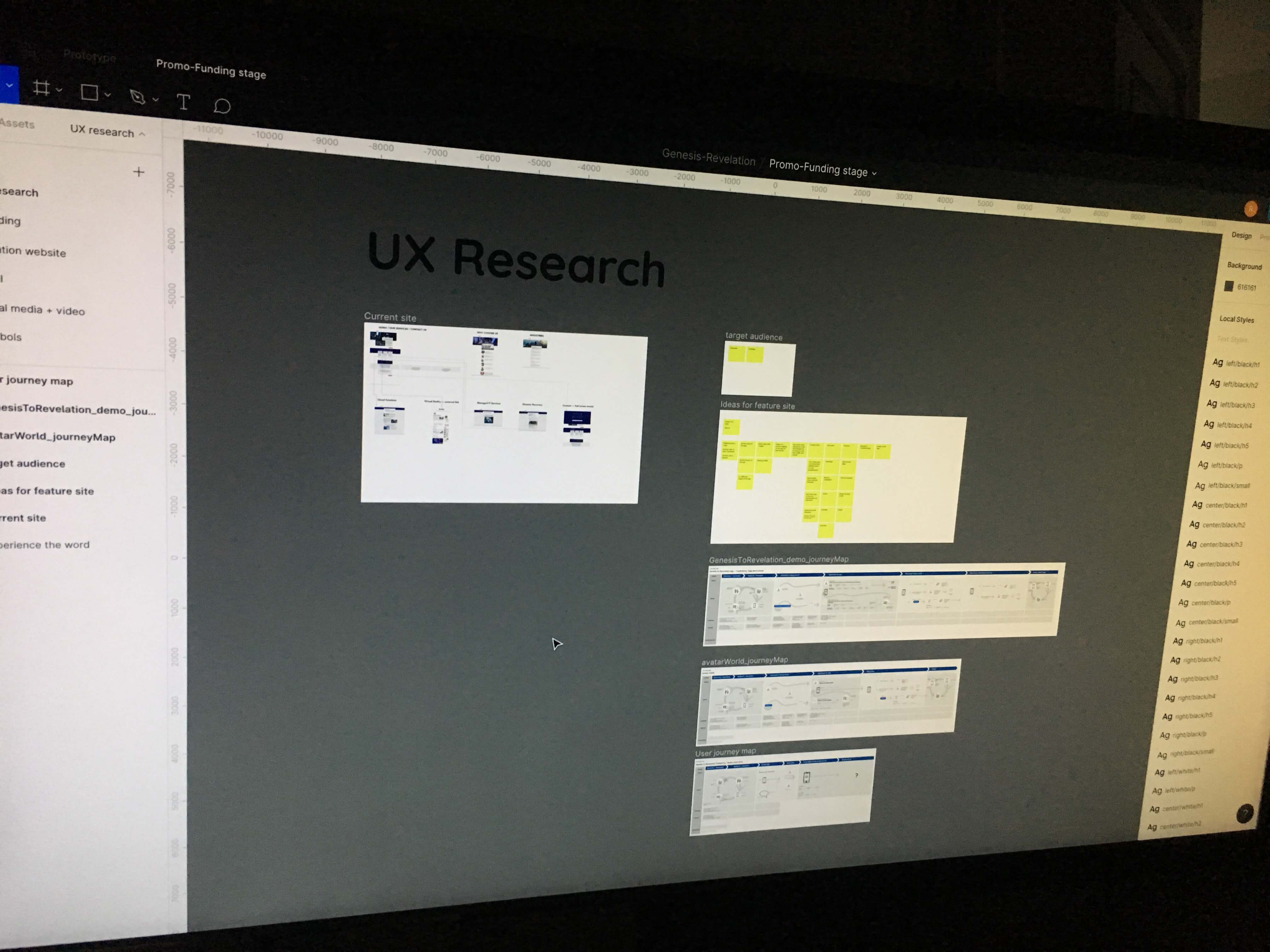 Organizations that love the vision are primary targets for us.

The current focus in this phase of the project is to target investors, philanthropists, and strategic Christian organizations that believe in building an immersive and engaging platform to start solving the problem.

Breaking down the process

Phase 1 of building an augmented platform to solve the steady decline of global Christian reading and church attendance, where people can connect with others to learn and grow. The findings were based on a Gallup poll in 2017. The CEO, Henry Stevens, presented an executive summary which outlined studies done to prove that this problem is a persistent one.

A few unexpected things happened to change the course of the project. After joining, the team visual designer was supposed to provide visual design assets to support but was only available to provide logos without any kind of brand standards to accompany. I made it known that I was able to do all the necessary visual design as well.

Focusing on the target audience for this phase was more of a secondary priority. We had an international team phone call where, being user focused was brought up as very important however, launching quickly was more of a top level priority.

The project direction changed a few times because the focus was getting more refined as time progressed, which ended up causing unforeseen delays.

Technology and cohesiveness was a constraint because of mental models. In some cases education was necessary before moving forward. Other cases understanding the correct vision was challenging so very little work could be done until that was cleared up.

Challenging when a startup is trying to raise money.

I use 1 of 2 types of processes.The first is:

Fully identify the problem. This was challenging because the vision was still being defined.

Was to understand the people I was designing for.
The current focus in this phase of the project is to target investors, philanthropists, and strategic Christian organizations that believe in building an immersive and engaging platform to start solving the problem.

Was to evaluate and understand what was going on, what was currently live because there were no known competitors. So I looked at an app platform example I was aware of. I was initially asked to do Experience design and build two (2) websites with an already proposed copy structure because the idea was to launch as fast as possible.
‍

Was evaluate what was needed. Very little assets were built to support the project goals. I initially received direction on the proposed areas to include in the redesign which were:

After which, I took a lean approach and skipped my paper and pencil to keep timing in mind. Wireframes were built to bring the goals to life. This was in the form of a two step approach, which turned out to be a few rounds as direction was given.

Starting visual design was next, the idea of a double portal website was eventually scrapped because the main focused was on one area which was the augmented reality app.

I did 3 slightly different versions of visual design, but the direction was changed to focus on a more feasible vision.

At this point, some usability testing was done, which revealed the concept wasn’t easily understood and a bit unclear.

I redesigned to focus more on portraying the technology and platform.

The stakeholders were easy to work with because the requests I made were met. The challenge was that focus and mental model in terms of my process, posed a bit of an issue, so I had to step back, regroup and record future meetings so I was clear on all that was expressed.

As the scope grew, so did the deliverables. At the end of this phase, visual identity expansion, a responsive preview webpage and feature webpage, email templates and brochure.

points to call out 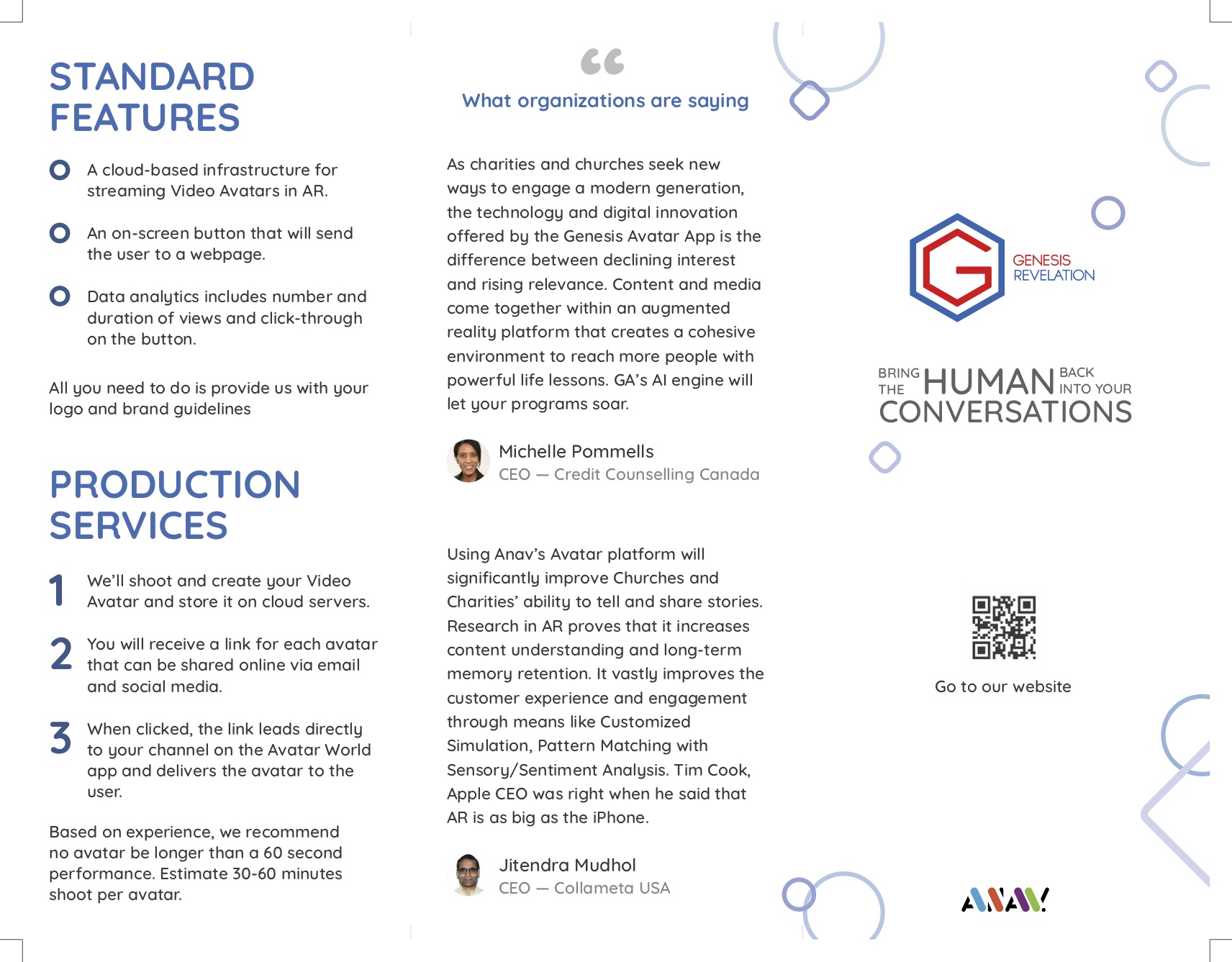 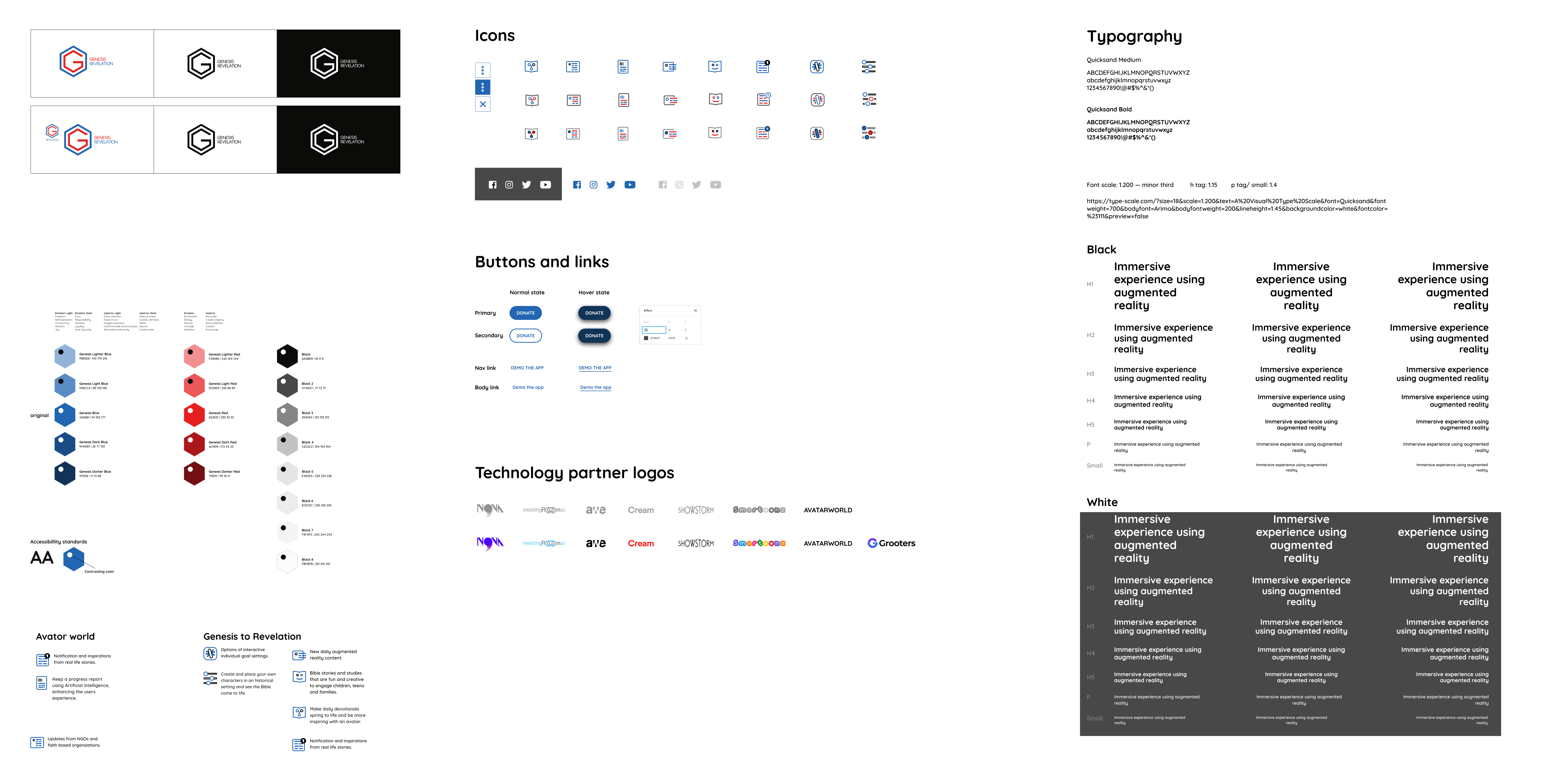 Have a better meeting plan.

The project was done more of an agile way, But was not on time due to changing priorities.

As the scope grew, so did the deliverables. At the end of this phase, visual identity expansion, a responsive preview webpage and donation webpage and email templates.

Success will be measured via donations primarily. Additionally Google analytics and hotjar was implemented to keep track of activity.

Next time, I would be more prepared to record discussions. Have a meeting plan so I could cover the necessary areas for the project.